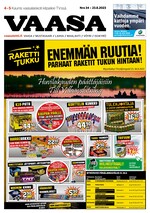 Can you Make it Out?

IKKUNA NEWS: Imagine being locked inside a room with a group of people for one hour. It doesn’t sound like fun, does it? But it is. In fact it is a lot of fun trying to let yourself and your group out by solving puzzles. This is the concept of real life room escape.

– Makeitout provides the opportunity to play Room Escape in reality in the heart of Vaasa. A group of 2–6 people get locked inside a mystical room and the goal is to make it out within 60 minutes by solving the built-in problems, says Robin Bäckström, the founder of Makeitout.

– You will feel excitement, frustration and euphoria. The concept of Makeitout is unique in several aspects and is appropriate for most groups from corporates to students of schools and universities. The maximum capacity will be 24 people once the second room opens in October.

Interesting concept. The concept is gaining popularity as it engages people in the game, puzzles and team building. In a way it is the real entertainment. It is also a nice way to keep the mind and the body refreshed.

– You can find Makeitout right by the square of Vaasa on Teräksenkuja 3. It is open seven days a week. Bookable times typically start between 13 and 21, except Saturday when it is bookable between 10 and 21.

Groups larger than 12 people are not recommended due to increased waiting time.

– The age limit is 12 years, as long as at least one of the participants is a grown up, otherwise the limit is 16 years. Anyone interested can take part by making a reservation online and showing up on time.

– I’ve played escape games in several cities around Finland. The level of the experience varies vastly, but if made well then you are in for a rare treat. As I was moving back to Vaasa this summer I saw a market opening and an opportunity to produce something amazing.

– I must mention I’ve had a big support network. Family members, friends, colleagues and Hanken New Ventures made this project possible. While it has been overwhelming at times, balancing it with settling into a new apartment and having a day-time job, I am very relieved to have the finish line in sight, says Bäckström.

The concept is stationary and static. After having opened one escape room, it stays that way. Bäckström plans to open a second room within the same facilities during October. The long term plan is to rebuild one of the rooms from scratch every second year.

– The concept is getting increasingly popular in Finland and all over the world. On a basic level, most people want to enjoy themselves and gather experiences which is the core of the business. Makeitout opens Vaasa’s first escape room and the response received so far has been nothing but positive.